Training Days are Over

“Did someone shove a rocket up your arse?”

Jamie Norton said this once after I zipped by him somewhere in Nevada. I heard those words in that Yorkshire accent over and over again today. I mean, I know a 13 mph pace is nothing to get all that excited about, but it's certainly my fastest of the trip and every bit of it felt great. It's only sixty miles, but I’m proud them, dammit.

Or it could be the fact that I brought my tires up to their proper PSI, having been very under-inflated since I changed my last flat (RIP old pump). That probably makes more sense.

I prefer to think that I'm finally warmed up.

There’s this thing that happens… about three weeks into starting any beneficial activity- whether it’s dieting, or exercising, or (I assume) yoga- where it starts to actually feel good. I suppose for some, it’s gradual. But for me I can pinpoint it. I know exactly where I was in Missouri when climbing no longer fazed me, and the day after a long climb in Albania everything else was metaphorically downhill.

“Why not just put yourself through that three weeks before a tour?” you might ask. And that’s a great question. But I have an answer. 1) Laziness. Reasons 2) and 3) and 4) and 5) are all other things that are eventually going to point back to 1), so I won’t enumerate them, but they’re there.

The way I prepare for a tour is akin to a runner walking around a city block and stopping at every bar in preparation for a marathon.

But the climbs felt great today, especially the Drumochter Pass in the Grampian Mountains.

It’s difficult to differentiate between a mountain and a hill, but in my vernacular, mountains are typically enjoyable to climb whereas hills are often not. Mountains offer long ascents, and politely ask your respect. If they could speak, they’d have a refined British accent- like that of Henry Higgins- and you accept the challenge. “Hello, and welcome,” a mountain would say, “If there’s anything I can do to assist you in your endeavor, please don’t hesitate to ask.” Hills, on the other hand, are just plain bitchy. And if they could speak, they’d sound like Fran Drescher from The Nanny. “Smell this!” they’d say, wondering if their freshly Febreezed hot pants would past muster in the self checkout at Wal-Mart. It’s hard to love a hill.

Mountains also provide rewards. You know what’s better than descending at a 3-4% gradient with the Scottish Highlands in the foreground for 20 miles while Ben Folds is providing the soundtrack on a (mostly) paved traffic-free path? Puppies. But that’s about it. Even Lennie Small would agree.

Steep descents are thrilling, for sure, but they're over too quickly and you have to exercise more caution. 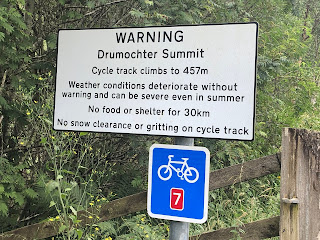 The weather was certainly Scottish today- the gray rainy morning turned to bright warm sunshine, but just as I passed a sign warning cyclists that there would be no shelter for the next thirty kilometers a storm appeared in the distance. I estimated it to be about fifty miles away. I was off by about forty-nine (give or take). It was sudden and violent, and I assumed the lightning that was crashing down would find me as its target. Ya' know... because I was wearing bright yellow. If I were lightning, I'd be attracted to yellow. But two miles later, that was over. "If you don't like the weather in Scotland," a passing cyclist said, "just hang around for ten minutes." Still, it's difficult to look at a Scottish 10-day weather forecast and get excited: 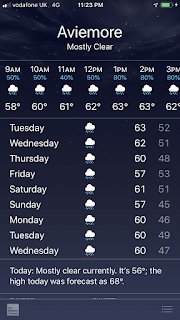 It was a somewhat hilly ride into Aviemore after the long descent was over, but I was amped. Rather than downshifting as I approached them, I did the opposite, attacking each one with fresh strength and confidence. I had completely forgotten about my stupid virtual partner, Chad. As usual, my Garmin alerted me that I had once again lost the race to him. But this time, he only beat me by five miles. Baby steps.

I was bummed when the sixty miles was over. But the ride always ends at a pub, where I met a local named Gary who was happy to add to the tale of the haggis ("It can either be shot with a bow and arrow or clubbed... it's skin is completely impervious to bullets!).

Perhaps I should've just kept riding on today. If it weren't for the fact that I'd secured bookings at sites for the rest of the tour, I probably would've.

When this leg was over, I didn't think I had it in me to do another sixty.

Who knew 'Little Shop of Horrors' was actually an accurate prediction of the future? 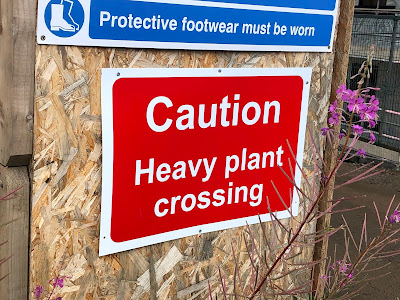