It felt like a flat tire sort of day. You know those days... Eeyore-esque. They're gray. You grind. Oh, bother.

I mean, it was fine and all. The ride out of Inverness took me over the nifty cable-stayed Kessock Bridge and through all sorts of twisty cycle tracks. And there were some decent climbs that I was happy to tackle, followed by quick, exhilarating descents. I enjoyed a scoop of Scottish tablet ice cream (yum) in the small town of Dingwall (Last chance to stop at a supermarket! my guide warned). Still, the ride wasn't quite meeting the norm.

So it was no surprise when the back tire went flat. Again. It was a frustrating half hour stop to repair it (getting a tire off is no problem... but putting it back on can be a bear). A couple vacationing from New Zealand stopped just as I was finishing to offer assistance. Their destination was the same as mine: Lairg. A village that has one of everything most travelers need. One hotel. One restaurant. One convenience store. The couple told me they'd meet me at the pub later, as I was only about an hour's ride away. I told them if they didn't see me there, it meant that I got another flat.

Indeed, I never saw them again.

My last spare tube went flat seven miles later, and no amount of pumping could keep it inflated enough to ride more than 100 feet or so. I weighed my options. I could walk to Lairg, which was a little more than four miles away. Or perhaps my last tube, which I had kept, still had a bit of life in it. So I changed it again, and the midges were happy to come help .

People had been warning me about midges since before I set out. They haven't been a problem yet at all, and I almost thought they were a work of fiction. Unlike the haggis, however, midges are real. They're these nasty gnat-like / mosquitoish hybrids that travel in swarms. From what I can tell, they're specific to Scotland, particularly the Highlands. And once they find you, you're at their mercy. I used a lot of foul language and threatened their tiny little lives, but they didn't seem to care. Midges suck. They don't know how to play nice. And my pock-marked face is evidence.

It was another half hour pointlessly spent as, of course, the tube was worthless. I knew it would be. Just figured I'd try.

Luckily for me (and I mean very luckily), a man named Pete Williams was out walking his husky. Pete is pretty much the only person who lives in the area where I was broken down. He assessed the predicament, and while I could've camped right there, we both figured the problem wasn't going to solve itself in the morning. He was gracious enough to offer me a ride into town, which I accepted.

Another stroke of luck was the availability of a cheap room at a B&B, run by a hospitable but no-nonsense woman named Win. I knocked on her door, gave her the £30 she requested, and then she told me to come back after I got dinner. I'm relatively certain this was the only B&B in Scotland with a vacancy. They're everywhere, even in the most remote spots, but the signs out front always say NO VACANCY. It's puzzling. Especially on a Wednesday.

At the local pub, three young guys named Douglas, Stuan, and Jordan figured out the plan for me. It would involve getting up early and taking a train back a few towns to Bonar Bridge (pronounced "boner" should you be curious). Like I said, Lairg has one of everything for most travelers. But most travelers don't need a bike shop. I was at ease though, and the conversation went from cycling to cinema. Their welcome to Lairg was extraordinary, and I had all but forgotten about my midge marks and troubled tires.

Back at the B&B, Win determined that I would need to be up at 7 AM for breakfast, and made no bones about the fact that she'd be knocking on my door at 6:45. "If I'm up, you're up," she said with a dry sense of humor. She also arranged a taxi ride to the train station for me.

I frequently mention predicaments on these types of trips before saying how lucky I am to get out of them. Were it not for Derek (the Kiwi), Douglas, Stuan, Jordan, Win, Pete, and the cook who made dinner despite the kitchen having been closed, I'd still be scratching my head.

But no one's that lucky. It's not luck at all.

It's a wonderful day after all when you realize that's just the way people are.

Maybe I've been around middle-schoolers too long... but I found it difficult not to laugh at the chosen graphic for the town's exit. 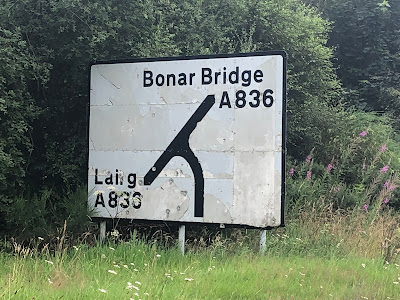