I Prefer the Mud

"You researched the weather of Scotland before you set out, right?" Kevin asked.

I was five miles into the day, and had already tried every permutation of outfit that I'm carrying. Pants and cycling coat seemed just right for the first two hundred feet. But it was suddenly hot. The pants became shorts and I shed the coat. One hundred feet later, the rain started. Lightweight rain jacket this time, and may as well put those pants back on, but it was just a quick shower. I settled on the jacket (which has all the breathability of a Hefty garbage bag) and shorts.

Luckily, Kevin caught up with me after all of these costume changes, so it wasn't entirely embarrassing, though the sheep of Scotland certainly got a show.


Like Mark Warren from yesterday, Kevin Scot ("With one 'T'!") is powering through this trip, aiming to complete it in thirteen days while his family travels ahead of him and sets up camp.

I'm at the point where I never quite know how to answer when a cyclist asks me "What day are you on?" Should I be embarrassed or proud that I'm taking my time? I answer the question, but feel a need to provide a rationale quickly afterward.

"[insert day number here]...but I took some self-guide guided detours to visit friends." But I was still traveling north.

"[insert day number here]...but both my legs are prosthetic." Too fact-checkable.


Part of me knows that no one else really cares... it's just a question for conversation's sake. But still. I feel like I'd be the last kid picked in gym class to join the team.

Kevin certainly didn't care. He was nearing his fiftieth mile of the day and didn't mind a breather. He slowed his pace down a bit, I kicked it up a notch, and we had a fine fifteen mile cycle together. It wasn't the breakneck pace set by Mark Cole, nor was it the casual cycle with Teresa Morris.


He explained the four different fronts that collide in Scotland on a daily basis, each one struggling to be the winner in order to determine the weather. Today, the winner was the watery front, whichever one that is. It wasn't entirely unpleasant, though I'd hate to label the spitting rain as "sun-showers" since that has too positive a connotation.


The weather's intensity increased after we parted ways, Kevin opting for the quicker route to Glasgow on a busy road, and me taking the advice of my guidebook onto country roads and quiet cycle paths. I swapped the jacket for the coat.


Compared with the ugliness of yesterday's ride, today was quite beautiful. It doesn't make sense. I'd assumed that as I got closer to a major city it would be more urban and icky. Not at all. My winding (and hilly!) path took me through well-maintained parks, humble suburbs, small towns, and wooded areas, slowly meandering its way to Glasgow.


And although I took my second (much more painful) fall of the trip after turning a corner and slipping in mud, I'm happy I took this route. I mean, sure the entire left half of my body was covered in filth... but I'm sure it gave me a rugged look. Like a cyclist who truly earned his pint at the end of the day. ("Took a little spill, did we?" the receptionist at the Glasgow Youth Hostel later said in place of "Hello.")


As I crept closer to Scotland's largest city, I kept looking down at my mileage. I knew I was due to arrive at the bustling centre on my 48th mile, yet at mile 45 I couldn't hear anything other than the sounds of nature. At mile 47, it only appeared slightly more urban as I pedaled along a wide river walk. Still, where were all the people? Why can't I hear the honks of exasperated drivers?

It was as if someone had pressed a mute button. Either that or the Zombie Apocalypse had finally arrived (luckily I had an air pump to fend them off and I was camouflaged in mud). Perhaps it was a fluke, but the I found the quietness of Glasgow downright eerie.


I was going to explore the city centre before finding my hostel for the night, but was deterred when I saw a cyclist laying in the middle of the road I was going to turn down, moaning in pain. He'd clearly just been hit by a car. He was well attended by Good Samaritans, and there was nothing I could've done to further help- I would've just been in the way had I stopped- so I kept my head down and pedaled on, cringing as each of his howls punctured the city's silence. It's easy to forget how dangerous it is to cycle amongst cars. All it takes is one careless driver (and we've all been that careless driver at one time or another, haven't we?). One person texting. One person speeding up at a yellow light. One person who didn't get enough sleep. Man, have I been lucky.

I had no desire to explore anymore once I found my way to the hostel. Instead, I found a quick dinner, had a beer at a pub, and sampled a scotch whiskey (read: did a shot) with a local named Andrew, who sounded like Shrek on cocaine.

Looks like my guide suggests a mere twenty mile stage for tomorrow's ride with virtually no climbing. I'm fine with that. Hopefully it's on cycle paths away from traffic.

I'm fine with slipping in the mud.

Just when you thought you'd seen every flavor of potato chip... 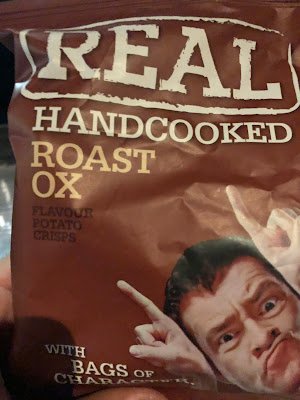