"Inverness is great... if you like smack and seagulls!" Gary had told me yesterday at The Bridge Inn in Aviemore. Not exactly a ringing endorsement. Neither smack nor seagulls seem particularly helpful to a touring cyclist. So I was pleasantly surprised to cycle into Inverness and find it to be such a great city. Though small, it's the largest city in The Highlands, and its downtown has a distinct charm to it- even through the cold, steady rain.

The ride in was nice enough. Simple. Quick. Quiet. Through the woods on a long cycle track, then through a couple of small villages, and into the Monadhliath Mountains. It's always a pleasure to see a "Summit" sign at the top of a climb, no matter how easy the climb feels. The mountains in Britain aren't tall by any means (especially in comparison with those in the States), but they're appearing more frequently on the ride and make for pleasant, light
challenges. 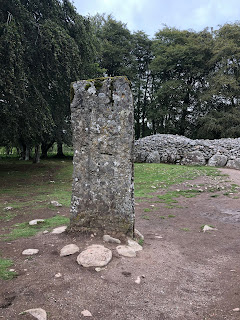 I passed by the Clava Cairns, ancient burial grounds estimated to be about 4,000 years old and still somewhat intact. It seemed important that I stop and take the same photos I saw other tourists taking. I always assume that other tourists know what they're doing, so when I see one snapping a photo, I often do the same. They just typically hang around longer than I do. I was in and out of the Clava Cairns in five minutes after reading an informational sign or two and checking out the rocks. "We've seen it! Let's go!" I could hear my father saying when my family got out of the car in South Dakota on a cross-country trip to glimpse Mount Rushmore. People travel from all over to see the famed landmark, but you could count the minutes we stared at it on one hand before skedaddling.

I mean, really. The ancient Clava Cairns were cool to look at, but what else are you supposed to do? Hold a séance and try to connect with the dead? What then?

The rain started as I left (I'm really getting sick of the rain... and boy oh boy does it make my shoes stink), and I hauled ass to my destination, where I Googled "Things to Do in Inverness" and examined a top-ten list, excited that I could already check off Visit the Clava Cairns.


Some other suggestions were Eat Haggis (check!), Walk Along the River Ness (check!), Enjoy the View from Inverness Castle (check!), Visit the Loch Ness Monster Center (hell no!), and Go to Gellions Bar, The Highlands Oldest Pub (don't ask me twice).

Nearly every pub in Scotland claims to be the oldest of its particular type. I don't understand why being old as an establishment is necessarily a good thing. But being that Tripadvisor suggested Gellions as a necessary site to visit, I didn't feel the need to argue.

When I walked in, two Polish women named Anya and Ivana immediately greeted me. They worked at a local guest house together and had been living in Scotland for 13 years. From the way they were groping one another, I assumed they were a couple. I had hardly taken a sip of the Loch Ness Pale Ale I'd ordered when Anya grabbed my wrist and said "Come on. Vee go now to another pub."

So I was pub hopping with Anya and Ivana.

It was fun at first, but it started to get weird when they decided to include me in the groping. Ivana eventually discovered that my lightweight pants become shorts if you unzip them at the knee, and half of my outfit was suddenly being tossed throughout the bar, at one point landing in the laps of two sisters from Missouri who were on vacation.

"Why you have my huzband's pants?" Ivana asked. "Vee just got married and now you have hiz pants."

"You just got married?" one of the sister's asked. I (foolishly) played along with dripping sarcasm in my voice.

"Yes," I said. "We met ten minutes ago, got married five minutes ago, and we'll be divorced before midnight."

These are the types of tourists who believe the haggis is indeed an actual creature who stalks around the Scottish countryside. When my new wife was out of earshot, I explained the truth. Ivana returned, and seemed genuinely jealous that I was talking to other people. She and Anya decided I could not be left alone, and one of them was always holding onto my arm, dragging me throughout the pub should they decide to move.


Like I said, shit got weird. And I was super uncomfortable.

As the Missouri couple was leaving, one of the sisters whispered something into my ear. "Do you know about asking for Angela?" she asked. I shook my head. No. "If you feel like you're in danger, go to the bartender and ask for Angela. It's code that you need help. I don't trust these two at all!"

I don't know what kind of ridiculous website these ladies browsed in preparation for their trip to Scotland, but can you imagine a 39 year old man with nervous eyes asking the 18 year old girl tending bar about Angela's whereabouts was with an exaggerated wink?

I made a hurried exit when Ivana and Anya made the mistake of trusting me alone while they went to the bathroom. "Stay right here huzband! Don't you move!"

Thank God I didn't tell them where I was staying.

They do know my final destination, however.

So should you hear someone desperately shouting for Angela on the way to John O'Groats, rest assured that they found me.

That moment when you're in the bathroom at a Scottish pub and are torn
between whether to purchase the inflatable sheep or the sticky willy. 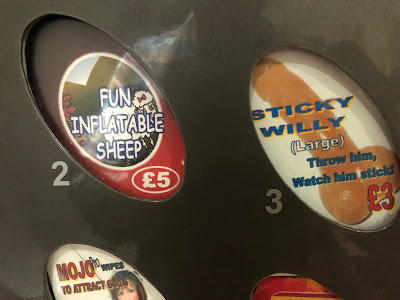