There's no real joy in finishing these rides, which seems counterintuitive. At the beginning, it's easy to imagine some dramatic finish and an elaborate victory dance, but that's not how it goes. I hate to use the word "sad" as a descriptor, but it's much closer to that. I never want them to end, and if I had the time, I'd pedal right back to Land's End.

With only 20 easy miles to pedal from Thurso, I set off into another gray day, slowly pedaling my way towards the famous sign post at the northern tip of Scotland. And it stayed gray... for the first half of the leg. But then, in almost storybook fashion, a beautiful patch of blue appeared, and I was heading right for it. Gray to the back. Gray to the left. Gray to the right. But blue in front. And for the first time since somewhere in England, I was fumbling around in my front bag for my sunglasses. The coat came off. And I had all but forgotten about the hellish weather from the day prior.

The sky was patient and polite enough to wait for me. It didn't ask me to pedal faster. And when I shimmied my way through the literal boatload of tourists to get the mandatory picture, it felt exactly like the day that I started. Two Everests ago.

There's this thing called "Everesting," where cyclists repeatedly tackle a hill in a single day until they've climbed the equivalent of the height of Mt. Everest. Not too many have been able to do it, and it's not something I am eager to ever attempt. Besides, I think it's a rather ridiculous goal. Comparing anything grand to Everest is like comparing anything evil to Hitler. It's a cliché.

John Oliver has a hilarious (and fascinating) take on Everest. If you haven't seen it, I highly recommend. (I would embed the official HBO clip, but the bootleg will have to suffice since John Oliver is not made available in the UK)


Still, regardless of how trite it is, it's fun to say. Two Everests. Don't take that away from me, John Oliver.

And no, I certainly didn't break any records. A 55-year old woman just set the running record of 12 days (!) for the direct route. People have unicycled it. This guy just did it on a Penny-farthing. There are all sorts of ways some try to get their names into record books.


I'm happy to say that I am, without a doubt, the only person from Westtown, New York to complete the route and finish on a Saturday while seated on a Brooks B17 green saddle.

That's good enough for me.

Thank you for coming along.

And thank you for your support.

On every trip, I inevitably see a sign that says "Thank You" for no particular reason.
I love it. 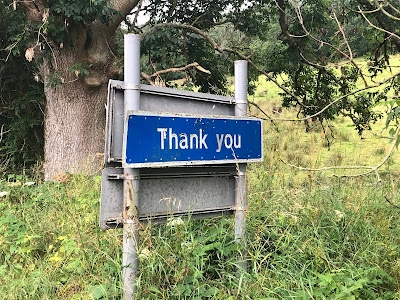