About eight miles into today's short trip, I stopped at a bench to take in the stunning view of Loch Lubnaig and its surrounding hills. Like yesterday, the climb was well worth it, and the bench was demanding some butt time. It was peaceful, but only for a moment or two. From a distance, I saw a lady quickly walking towards me. She looked nervous, and was cradling something that looked like a dirty white-haired dog. I thought for sure she needed veterinary assistance, and I was ready to break out a miniature roll of gauze and my set of Allen wrenches. That's pretty much all you need to fix anything.

"Did you notice a group of people walk by?" she called.

I told her I hadn't. I was still unable to determine what she was holding.

She rushed over with large steps to where I was sitting and laid down her charge.


She gingerly placed each one on the bench beside me in a perfect row.

"Can you watch these for me while I go off into these woods?"

"Of course!" I agreed. I mean, how often does one get the chance to babysit fungi? I didn't know if she needed to take a squat or what she was doing... but she was scampering with fury through the forest behind me.

For the next five minutes, I tried to come up with several different plans as to what my course of action would be should someone or something try to come between me and the mushrooms. I hadn't packed any pepper spray, and I was fresh out of battle axes. I decided I would just point an angry finger at the offender and loudly say "No! Those aren't your mushrooms!"

She eventually returned to the bench with another armload of 'shrooms, looking utterly confused as to how to merge the two caches into one manageable mass.

I suggested she use a bag.


Her name was Lisa, and she was part of the Clyde and Argyle Fungi Group ("You can find us on Facebook!") whose mission (I think) is to identify growth zones for different types of fungi in the area. She gave me a super quick lesson on which ones were edible before advising me never to eat any of them. And then she was off, in search of the rest of her group who had the proper carrying vessels.

I didn't have the heart to tell her she dropped a few in her haste.

I also set off, and about a quarter mile later saw a group of people on the side of the road enjoying lunch.

"Are you all by any chance collecting mushrooms?"


"There's a lady named Lisa who just went that way with a gold mine!" Nobody moved, and I got the distinct feeling the group was trying to ditch Lisa, begging the question How strange does a person have to be in order to be shunned by a fungus forum? "I can cycle back and tell her you're over here."

"I'll get her," a man finally said with resignation. I was glad. I felt like a good babysitter. Lisa's mushrooms would be safe.

The rest of the ride was nearly as stunning as yesterday's as I climbed along an old railway and eventually descended into the town of Killin, where families were splashing in the Dochart Falls and enjoying the rare sunny (and somewhat hot!) day.

But a new problem arose for me.

I fully appreciate what my guide is doing: It's slowly taking cyclists through the best of what Scotland has to offer and encouraging them to stop and enjoy. But I'd only been a few hours on the bike, and was unsure of what to do after I cycled through the town and enjoyed the view of the falls. I mean, how many hours can one stare at the same thing?

I'm rarely bored on a bicycle. Maybe once or twice during the Trans America trip, and perhaps once on this year's ride into Abington, but that's it. Too much time off the bike is when boredom starts.

With hours to kill before nightfall, I tried to figure out a way to be productive. So I sat in a pub and did something I've never done before: I planned the rest of the trip, securing stays at hostels and campsites, and buying the train tickets necessary to get to Edinburgh after finishing. I even tried to get the appropriate bicycle reservations for the train (no luck). That kept me busy for some time. But after it was done, the boredom crept back.

I had no plans for the night other than to set up camp somewhere in the woods.

"Wild Camping," as it's called, refers to camping on land that is not specifically designated for that purpose. Unlike England, it's legal in Scotland. The extremely vague law essentially reads Camp wherever you'd like... just don't be a dick about it.

Can you camp in parks? Sure. Just try to stay hidden. No one wants to see you camping. Pretend you're not there. If we both cover our eyes, we can't see one another.

Can you start a fire? We'd prefer you didn't. But if you must, then go ahead. But please don't. We're asking nicely.


This law is somewhat controversial as people, of course, abuse it. The spot that I found just 500 feet out of town was perfect. Right beside a talkative stream and somewhat camouflaged under the tree cover. But someone else had been here before me, and had left a trove of beer bottles behind.

It's like that one student who can't handle being trusted to have a cell phone out during class, so the teacher has to change the rule and demand everybody keep them in their backpacks. A handful of assholes ruin it for everybody.

But for tonight? I'm good.


And I was still within walking distance of the pub, where I met David and Alison Macdonald (and their dog Roxy). We enjoyed one another's company while listening to the music of Scott Macdonald (the "MAC" section of Scotland's phone book must be intense). Though it was still early on a Saturday night, the crowd dwindled to a handful hours before closing time, and eventually Scott was singing to just four of us. A quiet night, but I was no longer bored.

Back to the campsite in the dark, using my phone's flashlight to find the tiny footpath to my tent.

And carefully sidestepping any mushrooms.

"Honey! I'm going to drop Tommy off at the Killin Nursery!"

"Isn't that a bit drastic? I know he's in his terrible two stage, but have we explored other options?" 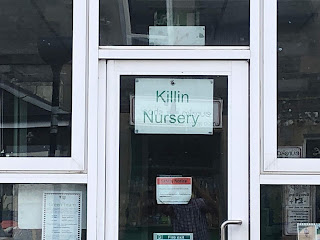