I can hear my grade school teachers saying "If you don't have anything nice to say, don't say anything at all!"

That was a terrible, terrible ride. I enjoyed zero percent of it.

Actually, that's a lie. I had a chicken caesar salad for lunch. I enjoyed that.

And occasionally I would shift in my saddle, causing the warm butt water caught between my chamois and my midsection to run down my legs. I enjoyed that too.


I was about to head out on my penultimate day when two other cyclists were entering the hostel I'd stayed at. They were calling it quits, and they were shaken. "You don't want to go out there," one warned. His tone was devoid of humor, and there were no pleasantries exchanged. Both were immediately on the phone with their wives, calling a cease and desist on camp setup and redirecting them to their new location.

They were right. I didn't want to go out there. But the hostel I'd booked in Thurso had a 10% cancellation fee. I'll be damned if they were going to steal £2 from me.

So I sucked it up, and pedaled away.

The already challenging terrain was made exponentially more difficult by the 40 mph headwinds and the stinging horizontal rain. Seconds felt like minutes. Minutes felt like hours. From the first pedal, I wanted the day to be over. It felt like I was cycling into a hurricane, and it never let up for a moment.

The wind was screaming in my ears, drowning out the sounds of cars approaching from the rear so that each one that passed me on the single-track road was a jarring surprise. "THE DAY BELONGS TO ME!" the wind yelled. "GO HOME! YOU DON'T BELONG HERE!"

My only response was to occasionally blurt out nonsense syllables.

I don't know why.


I'm thankful that my legs were strong, because my mind certainly wasn't. The legs, however... I just watched them power up punishing climb after punishing climb, completely unfazed. They seemed detached. A separate entity from my body. But then again, everything seemed detached. My hands were numb and useless, and my arms were indifferent, sheltered by my neon yellow cycling jacket.

Descents were far more painful than climbs as my eyelids couldn't blink away the rain water fast enough and the wind threatened to push me over. When you can't find happiness in a descent, something's wrong.

I stopped only twice in the 46 miles. Once halfway through for a cup of coffee and a bite to
eat, and another time in a curiously remote phone booth, which I used as shelter while I took a leak into the storm. There was a sign in the booth, warning that it was going to be removed soon unless someone called to advocate for its existence. I tried to call to let them know I was making very good use of it. But the phone didn't work.

I tried to think warm thoughts, but the only thing I could come up with is my recollection of the penultimate day on my last tour, where I had camped on a beach and skinny-dipped in the welcoming Ionian Sea. That just made it worse.

There will be no skinny-dipping at John o'Groats tomorrow. You're welcome, Scotland.


I only saw two other cyclists out, heading the other direction. They smiled and waved, probably enjoying the 40 mph tailwind that may as well have served as a motor for them. I could only get myself to politely nod.

The misery lingered at the end of the ride, when I arrived at the hostel. My pants were soaked, but I had nothing else I was willing to wear in their place when I went out in search of dinner. So I sat over a plate of nachos, shivering.


I also skipped the beer, and ordered a Scotch whiskey instead. A foul-mouthed local named Kenny asked why I was taking a picture of it. I explained, and he ranted about how much he hates cyclists. "All of ya' c***s! I hate all of ya'! Ridin' in f***in' packs and holdin' up f***in' traffic!" I told him I ride solo, and I'm very conscious and considerate of cars. "Yer just another c***!" he replied.

"You know what, Kenny? I had the shittiest day I've ever had on a bike and I'm not in the mood, so go f*** yourself." It just came out. Both of us were surprised.

"I changed my mind," Kenny said. "I like you." Soon after, we were both laughing, trading insult for insult. I didn't pay for the second or third whiskey, and it took some self-discipline to leave after that.

My pants were still wet, and my spirit was still dampened, but everything was a little better. I was starting to hear that other grade school adage: "Whatever doesn't kill you..."

Someday, I'm sure I'll look back on this ride and laugh about it. Perhaps I'll even trick my memory into believing that I enjoyed powering through it, and finding the grit needed to go on.

Look! A urinal toy! You play soccer with your stream!
I scored four goals and was awarded a penalty kick.
I was out of bounds twice. 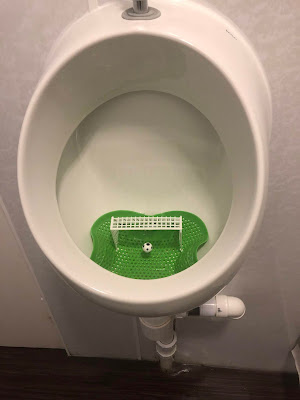