My latest start of the trip. 12:45 PM. That's the time that normal touring cyclists are often in the final third leg of the day's journey. Not me!

It's not that I didn't wake up early enough. I opened my eyes at 7:30 AM in my tiny tent, listening to the rain pounding down, and thankful that I'd replaced my old paper-thin coffin-sized tent on Day 2. Maybe I'm not a "real camper," but I find it difficult to willingly step foot out into a driving cold rain moments after waking up. I allowed myself a good three hours of dryness, warmth, and self-contemplation while bathing in my own morning stench before I even reached to unzip the tent flap.

I was also able to amuse the more adventurous passers-by, who were all getting a jump on the day for their morning hike. Apparently, I was not as camouflaged as I thought as I heard each of them make some sort of commentary about my set-up. I wonder if there's anybody in there? I heard one say. Look! A wild camper! from another. How many people do you think can fit in that tent?

I answered each of these queries with my loud morning trumpet sound effect.

It's a sound that doesn't require vocal cords.

But boy, it never fails to delight people who aren't within the immediate olfactory-affected area.

They'd giggle. Applaud. Cheer. Thankful for the monosyllabic answer to their question. And then move on, happier than they were before.

Just doin' what I can to improve a person's day. One fart at a time.

At 10:30, I managed myself into the previous night's outfit, stuck a tentative foot onto the wet ground, and ambled downtown for some breakfast, leaving all my gear behind and confident that my humble abode would retain its essence and fend off potential thieves.

I'd tried a full English breakfast a couple of weeks ago to a less-than-ideal result. But I'd figure I'd give the Scottish version a go. I ate everything I could immediately identify and was left with black pudding and haggis, both of which skeeve me out. I think if they were named something different, it'd be fine. But the version of pudding I'm familiar with is devoid of blood as a key ingredient, and "haggis" sounds like a disease.

On a side note, native Scots love to try to trick tourists into thinking that "a haggis" is an actual animal that roams the countryside terrorizing people. Their eyes light up should you be the one to ask them if a haggis exists in that form, each one embellishing the legend of the dangerous creature with his own far-fetched details. The only consistency is that the haggis has two very short legs on its left side, and two longer legs on its right, enabling it to run around Scottish hill sides in one direction quickly and efficiently as it hunts down prey. It's even more fun if you play into it for a bit and let the tale teller keep adding to his descriptions. "Google it!" David Macdonald had told me, "You'll see!"

Sure enough! It's on the internet! It must be true!

Anyway, haggis wasn't too terrible. Had just one tiny taste. Still can't tell you about black pudding though.

I slowly and lazily packed just as I slowly and lazily cycled the 40 miles to Pitlochry, enjoying the ride along the entire eastern length of Loch Tay and noting the many spots where it would've been excellent to wild camp should I have moved on further the previous night. The rain had stopped, but it was another jacket-off / jacket-on / jacket-off type day as someone had turned the air conditioning back on and a mystical grayness hung in the sky. Waterfalls. Lochs. Woods. Repeat. It may seem redundant on the outset, but it's not at all. It's wonderful. And with all the curves in the road, there's always a bit of mystery to keep the mind engaged.

At one point, I was passing a strange looking village of sorts. The sign out front read The Scottish Crannog Centre, and I was overcome with curiosity. I paid the steep £10 entry fee and poked around for a bit. It was full of craftsmen/women dressed in traditional garb celebrating Scottish ancestry and the Iron Age, each demonstrating a different trade. Ancient cooking, spoon carving, knife-making... and.. erm... other stuff.


It reminded me of Museum Village in Monroe, New York... except it was interesting. Being the world's worst tourist, I skipped the tour of the actual crannog (an ancient loch dwelling), passed through the tiny museum portion, and snapped a few pics of the demonstrations. I figure that stop cost me approximately £1 per minute.

It was a solitary ride from there, circumnavigating the southern tip of Loch Tay and disappearing into the woods as I was introduced to the Highlands. Towns are noticably further apart, and the population is thinner. Though I was on the road for much of it, I encountered little traffic. I popped in my earbuds and let Apple Music's Americana playlist accompany me the rest of the way into Pitlochry, a trendy (surprisingly busy) Victorian Era village in the Tummel Valley.

One thing that I've found disappointing since I've reached Scotland is that each of the towns my guide has me staying in is heavily touristed. I suppose it's only natural, but it's becoming a frequently disappointing ending to each day. In small towns, it's easy to strike up conversations with locals and get a flavor of the area. In these? You're just another tourist. Thanks for stopping by. Show me your wallet.

Had I known this ahead of time, I may have tried to stay overnight in some of the tiny in-between towns, but honestly... have you ever heard of Pitlochry? Callander? Killin? Balloch? Unless you've actually been on a similar tour or did some serious nerding-out while studying for the Geography Bee in middle school, I'm guessing not. They all sound like small towns to me.

The rain had started back up with a vengeance as soon as I reached the night's accommodations, and I kept largely to myself, even though my bunkmate, Gerry, desperately wanted to discuss American gun violence after sharing the dreadful news of back-to-back shootings that I'd been blissfully unaware of. I skirted the topic, and instead enjoyed the sounds of a couple fiddlers and an accordion at the pub next door before calling it a night.

I figured there was plenty of time to talk with Gerry in the morning.


You gotta love a town that's willing to poke fun at itself on its own government issued sign. 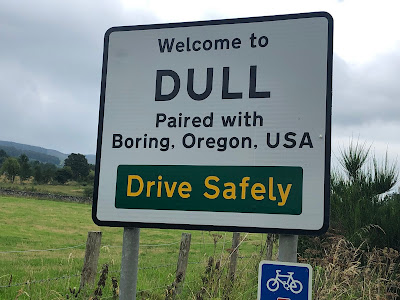 Yes. It lived up to its name.