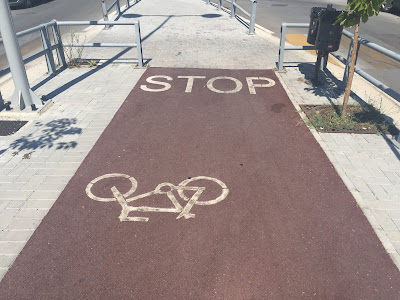 I done screwed up again.

Thought I had another week left before I had to be back home for a piano playing commitment.

You know when you give a person a gift… but it’s really not a gift… it’s just something you think they could really use in order to make him/her a better person?

There are two types of these “gifts” that I get on a semi-regular basis: Daily planners and nose hair trimmers.

I’ve never made practical use of either.

Time to book that flight home ASAP (thanks, mom!).

And a Sunday flight out of Athens left me with two options:

OPTION #1: Pedal my ass off to Athens. Get those 150 mile days in that I said I would. Stress out over finding a cycle shop open on the weekend with a spare box to donate in order to pack. Risk missing the flight or leaving the bike in Greece… actually the latter isn’t part of the option. Wouldn’t dream of leaving my bike behind.

OPTION #2: Stop. Camp on a beach near beautiful Preveza. Take two days to find a bike shop. Swim in the Ionian Sea. Talk with people. Get a haircut. Eat real Greek food. Watch the sunset on a beach. Take a bus to Athens on Saturday.

If I had a real goal- a real destination for the end of this trip- I might care. But this has been Bike Wander 2017. I never planned on ending up here in the first place. Originally, I thought I’d go through Switzerland and head over to Italy.

Besides, I have an entire beach all to myself, and a 500 meter walk to a mini-market for a cold one.

I met wonderful people this year.

I had several great reunions.

And I did my work.

I pushed myself like I’ve never pushed myself before. I mountain biked day after day with a fully-loaded road bike. I climbed the steepest mountain I’ve ever climbed. And then I climbed some more.

I shed better than 20 pounds in the last week alone.

Now bring on the tzatziki and the moussaka.

I got to the barbershop just as it re-opened at 6 PM.

Bustling cities in Greece become ghost towns between the hours of 2 PM and 6 PM for “siesta,” which is a misnomer if I’ve ever heard one. As far as I remember from my years of Spanish class, “siesta” means “nap.” And you can’t say “I just took a four hour nap!” without an ironic twinge in your voice.

Although I haven't a clue where everybody suddenly goes during these four hours, I’m a bit jealous. I would love to see this practice implemented in New York. Can you imagine what a Broadway matinee would be like if the entire cast just abandoned the stage 15 minutes before intermission? I guess if you were stuck watching Cats, that’d be great news (spoiler alert: nothing of any substance happens and the songs sounds the same as any other Andrew Lloyd Webber show), but what if you never found out who/what Godot is in Waiting for Godot (spoiler alert: you don’t)…

Anyway, the barber was delighted when he saw me pull up: a true challenge. I was going to be his Mona Lisa. After some Usual Questions, he was even more excited, and explained in Greek to everyone who came into the shop over the next 45 minutes that I wasn’t as homeless as I looked. I can’t be sure of the exact words he used, but I did hear “Forrest Gump” quite clearly.

I do regret that I’m not spending more time in this country. I’d happily trade the entire Czech Republic ride for a couple more days here. It’s beautiful. The roads are maintained. And the people have big, fun, loud, overly-emotional personalities. They often sound like they’re arguing with one another, even when they’re just saying “hello.”

And their “Goodbyes” seem heartfelt too.

I only had a 50 Euro note on me, which the barber couldn’t break. Neither could the other three waiting customers. So I went to the mini-market around the corner to buy something in order to get smaller bills.

I came back with the payment and five cold beers- one for each of us in the shop. He had already started snipping away at the next guy, but work came to a halt. No one was in a rush. No one complained that they’d already been waiting too long for the hairy American.

Instead, we took a brief siesta, and talked.

One of the new Usual Questions is “Where are you cycling next?” And this was the topic of our Barbershop Beer.

I’d be lying if I said I haven’t thought about that. In fact, I’ve become somewhat obsessed with maps lately.

Turkey’s not too far away… and it looks like I could make my way down to Israel if I’m careful, which makes Egypt very doable. And as long as I avoid The Congo and Somalia, I could probably make it to Cape Town by Christmas…

Then I snap out of it.

If I were slightly more irresponsible… just slightly… I might go for it. Because it’s hard to look at a map and think of the people you haven’t met after having nothing but fantastic experiences with those you have.

But those encounters will have to wait for another time.

Thank you so much for following my blog this year. The support has been incredible.

Once again, I never felt like I was riding alone.

My favorite sign of this year.
In the middle of nowhere.
And it's simply being polite. 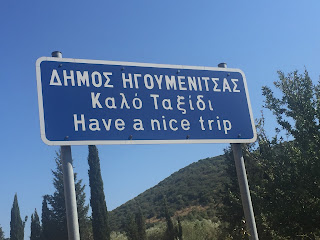 I said "Thank you. You too" when I saw it.
Then I realized the sign probably wasn't going anywhere.
Posted by Jim Quinlan at 11:33 PM 5 comments: