One of the stupidest books I’ve ever read is a true story called Round Ireland with a Fridge, by Tony Hawks. I don’t know where I came across a copy of it. I think someone left it behind on an airplane, or perhaps it was in a doctor’s waiting room. My only regret is that I read the whole thing (it was later made into an unwatchable movie). The title gives away most of the plot: on a drunken bet, the hero sets out to hitchhike around Ireland with a mini-fridge in tow. It was a £100 bet. And Hawks spent £130 on the fridge itself. While it has a quirky premise, it’s poorly written (and I read this way back when I thought the prose of James Patterson was sublime), devoid of meaningful content, and just plain dumb.

I highly recommend it.

Hawks’ mission was only slightly more stupid than that of Pad, Jeremy, and Sean, an Irish trio that I met in the centre of Balloch after the day's ride.  Though, in my opinion, Balloch is not a town that deserves special attention, it’s at the southern tip of Loch Lomond, and naturally draws tourists setting out on all different types of exploration throughout Trossachs National Park. These three were certainly prepared for some sort of quest.

“What are the brooms for?” I asked. Each of the three hikers had his own newly purchased janitorial broom. One had a plastic fork behind his ear. And another carried a large blank canvas.

They stared at me as if they’d never before heard the adage ‘There’s no such thing as a stupid question.’

I looked at them. They looked at me. Then the three burst into a haphazardly choreographed sweep session, clearing the clean sidewalk of, well… nothing. I waited until it was over. All three were beaming with pride.

“No seriously, what are the brooms for?”

“They’re for sweeping!” another shouted. They repeated their dance.

This went on for a few more minutes, and I found it remarkable that they were able to keep up the same routine every time I asked about the purpose of the brooms. Finally, I capitulated. The brooms were for sweeping. Their goal was to hike throughout Loch Lomond… and sweep the very well-maintained trails.

“What if there’s a stray leaf on the ground?” Pad asked.

“I’ll sweep it away!” Jeremey responded, showing off his skills.

Giving up on the brooms, I asked about the rather large blank canvas in tote. They didn’t seem to know what that was for. But they did ask me to scribble a bit of graffiti on it. And I obliged.

The plastic fork behind Jeremy’s ear was the only thing that made a bit of sense to me.

The three suddenly realized they had a bus to catch and fled with their ridiculous accoutrements in tow.

The ride to Balloch from Glasgow was absurdly short and easy. It probably should've been rolled into another stage, but my guidebook suggested taking advantage of the day and boarding a boat cruise to tour around the famed Loch Lomond. By the time I got there, the last of the cruises was set to depart in an hour, and I was tempted. I figured I'd secure lodging, have a quick lunch, and sail away!

To pull that off, however, one needs to plan ahead just a wee bit. Not my forte. While the small town is jam-packed with B&Bs, most of them were entirely booked. The ones that weren't wanted a small fortune and an organ donation for a night's rest. Even the local campground was reserved for glampers only, and they scoffed at the idea of a smelly guy in a tent on their grounds. I gave up on the cruise, and instead opted to stay at a campground five miles away, which appeared to be located lakeside. As I pedaled there through the beautiful Balloch Castle Country Park, I imagined myself sitting in my tent as the sun set, occasionally sipping a brew and writing tear-inducing poetry with the shimmering waters of Loch in my peripheral.

No such luck. Most of the ride there was along a busy, narrow (and hilly!) road. When I eventually found the site, it was a big let down. No lake. Just other campers. Nowhere to charge devices. Dirty facilities. No small town nearby. And not so much as a picnic bench to take a seat. I set up my tent, but my choices were to either lay down in it (and fall asleep at 6 PM) or awkwardly stand next to it, and admire the view of the other tents.

So I rode five miles back to Balloch. Hills. Traffic. Blah blah blah.

It would've been great to spend the rest of the night there, especially after befriending a few locals and a hilarious couple celebrating their 35th wedding anniversary. The thick accents- while often rendering their speech incomprehensible- only added to the fun. But at 11 PM I called it quits, put my faith in my taillight, and rode another five miles back to camp. Ironically, most of the day's ride (and certainly all of the climbing) came from the three trips back and forth to Camp Sucks-A-Lot.

The next morning I rode back to Balloch (yet again) to pick up my route. I could've followed Google Maps to the next town, but FOMO got the better of me. I didn't want to miss any portion of what my guide called "...one of the most scenic stages of the entire route."

From start to finish, it was incredible.

I'm trying very hard to avoid using superlatives and saying something like "It's the most stunning ride I've ever been on." Since I typically live in the moment, it's hard to compare what I see in the present with what I've seen in the past. I mean, Utah was particularly amazing for sure. But this ride... I'm pretty sure it's one of the most stunning rides I've ever been on.

Climbs were challenging, fun, and seriously rewarding as they led to top notch views of the Trossachs and Loch Lomond.

I toured through the lovely towns of Drymen, Gatmore, and Aberfoyle, renowned for its wool production.

Then up a steep climb through Queen Elizabeth Forest Park, thick with tall trees and rife with tiny waterfalls. I assume that the rough paths and tricky terrain deter a lot of tourists from venturing too deep, so it felt like I had the place all to myself.

An easy ride along Loch Venachar saw me into the town of Callander, nestled amongst hills on the east side of Trossachs Park. The sun came out, and I realized that this was my first rain-free day in Scotland, which made me appreciate even more that I had gotten the ugly out of the way all at once in the trip to Abington.

I hardly talked with anyone- there were no quirky characters, and I only came across a handful of touring cyclists.

But this wasn't the kind of day that called for company.

The day spoke for itself.

There sure as hell wasn't anything that three Irish guys with brooms needed to sweep away.

I failed to read the camp rules in a timely fashion.
After reading rule #5 at midnight, it was awkward to have to wake everyone up at the campground in order to introduce myself. 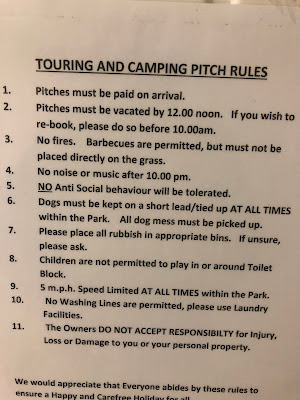