My Father and I Completed Three Different Tours on This Tandem. It Still Hangs in His Garage. 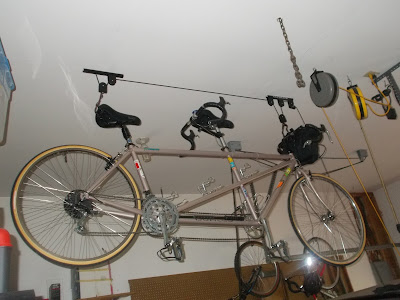 You would’ve woken up earlier than me and watched the sunrise. You would’ve unpacked your metal cup and used it as a water glass, rather than drinking out of the plastic bottle.

You would’ve talked to the cyclist camping in the adjacent pavilion before starting the day, and you would’ve peppered him with questions about his life, rather than offering tidbits of your own. And he would’ve left, not knowing that he'd just spoken with one of the most accomplished people in the country.

You would’ve checked the air in the tires and oiled the chain first thing, rather than waiting 45 miles into the day’s ride... like I did.

You wouldn’t have cared about crossing your 2000th mile, or cycling for a back-to-back century. Those kind of details never meant anything to you, especially when there are so many people to talk with, and so many places to explore.

When I sped by the Fort Larned National Historic Site, I realized that you would’ve stopped. So I did a U-Turn. And I stopped too. You would’ve read every single historical marker there, and then you would’ve researched more that same evening on your own accord. I didn’t do that much. I can only meet you halfway in that regard. I stopped. And drank some water. And took a leak. Baby steps I know. But at least I stopped.

You would’ve seen the dilapidated barn in the middle of a field, and you would’ve wondered aloud about its history. You would’ve put the day on hold and walked in, and admired its simplicity. You would’ve pictured it being built eighty years ago by a small family, trying to eke by in an economic depression.

You wouldn’t have been annoyed by the oversized trucks zipping by, hauling gigantic blades to a wind turbine farm. Instead, you would’ve marveled at the incredible engineering it must’ve taken to create those blades, and mused about the process of building a wind turbine farm. You would’ve droned on and on about the physics involved, and I would’ve tuned out. My small mind can only handle so many lessons. 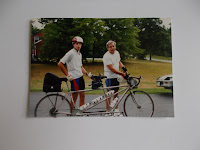 You would’ve foregone the Audiobooks and the iPod Shuffle for fear of missing the music of Kansas; the cows mooing, the wind rustling through the corn, the conversations between two farmers, shouting directions to each other over the noise of their tractors. 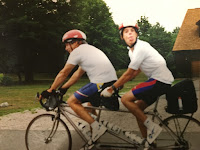 You would’ve repeated the same jokes in response to every single person who asked you a Usual Question. They would’ve thought you came up with such a witty response on the spot- you were a good actor when it came to that. But I would’ve known better.


Some would call their fathers out: “Dad! You say the same thing every time somebody asks that!” But I would never do that. Because I do the same thing.

And, like me, you wouldn't be ashamed to tell a white lie.

One of the Usual Questions is “Why are you doing this? For a charity? Or for fun?”

That’s my go-to response. Unless the person asking seems truly interested. Then I tell the truth:

This is the ride my father always dreamed about. He planned on it, and he was going to do it. But pancreatic cancer got in the way. So I’m doing it for him.

I usually keep this to myself because I don’t want people touching their hands to their chests, cocking their heads, curving their eyebrows downward, and saying “I’m so sorry to hear that.” You don't want that either. So white lies work better.

When I do tell the truth, I say it with a smile and a glimmer in my eye. Never with tears.

It’d be a shame to let sadness get in the way of something this incredible.

This morning, Mom, Laurie, Ric, Uncle Rob, and your four grandchildren scattered your ashes in the Badlands of South Dakota. They called my cell and I pulled over at an intersection- at “Q Road” to be exact. I watched through Facetime. I hardly spoke any words. I just... watched. And smiled.

I have thought about you every single day of this journey. At length.

I thought this trip would be a painful slog. Something I would just have to “get through.”

I couldn’t have been more wrong about that. At some point, the initial goal of bicycling from the Atlantic to the Pacific changed. I realized in Missouri that I met my goal, and that getting to the Pacific is secondary.

In your death, you figured out how to give me the gift of a lifetime.

I would love to be with our family right now. In South Dakota. Celebrating your life.

I would love to be with Hanna right now. In Ireland. Meeting her family.

I would love to be with Daryl and Mirja right now. In New York. Reuniting.

But there’s nowhere I’d rather be in the world right now than in Dighton, Kansas- population 1,023- in the middle of the ride of your life.

We miss you, Dad. But know that your entire family is taking the Summer of 2016 and embodying your spirit and zest for life.

And we’re having a damn good time doing it.

Please find the time to take 8 minutes out of your day and meet my father.